Education in Stevens County during The Great War remained a crucial component of day-to-day life. After all, children do not stop growing just because a war is on. Public schools throughout Stevens County in response to WWI, “received constant and continual instruction along lines tending to develop Patriotism and true American Citizenship.”1Roberts, Ray. War Service of Stevens County Rural Schools, Stevens County, MN, 1919, Stevens County Historical Society. Essentially, this means that students in public schools were instructed in a variety of manners on how to contribute to the war effort—definitively along nationalist lines, and especially in Stevens County.

The first form of instruction came in the form of literature and propaganda. The Commission of Public Safety (CPS) was the preeminent organization that dictated, more or less, the distribution and dissemination of information throughout America’s schools. In particular, the Minnesota Commission of Public Safety (MCPS) took on an even stronger role than their parent organization, resulting in a distinct emphasis on the role of being American.2Further reading: book I forgot the name of but will find tomorrow.

“The patriotic literature which was received in Sept. was distributed thru the schools of the town and country and the teachers asked to make use of them in the English classes. Posters received were placed in conspicuous places and some of them are still in place in the library and schools.”3Swan, J. G. J. G. Swan, Chairmen of Children’s Year Committee to Madam Chairman of Minnesota Commission of Public Safety—Women’s Auxiliary Committee, Morris, MN, November 22, 1918. Stevens County Historical Society.

Both students and teachers were bombarded with propaganda throughout The Great War. Among the collections I discovered, with the help of the Stevens County Historical Society, a majority centered upon an understanding of America as a masculine and feminine figure—capable of physically defending the women and children who produced the materials needed for the men to fight.4Stuhr, E. W. E. W. Stuhr to Madam Chairman Ida Hancock, Morris, MN, December 27, 1917, Stevens County Historical Society. The relationship between the two, no doubt, was mutual in theory. Specifically, throughout Stevens County the posters and literature distributed focused on the production of foodstuffs—no doubt important to the children of farmers. Thus, these children were educated along nationalist line, and were urged to develop a strong sense of patriotism as a result of doing their “bit” in the form of producing and manufacturing corn, wheat, and meat. 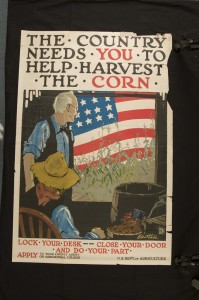 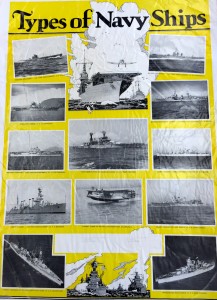 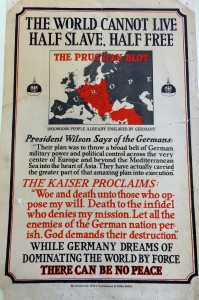 Above all else, The Great War was the writer’s war — at least for those on the front. The era certified and cemented the attitudes of cynicism, pessimism, and nihilism. Writers like Ernest Hemingway, Alfred Noyes, Erich Maria Remarque, and Ford Madox Ford dominated the post-war literary field all the novelty of modernism. Indeed, there was something about digging the very trench in which you were bound to die that left its imprint upon society forever. Yet many of those in Stevens County were illiterate, and unable to read to treasure of novels and poetry produced.

The charge of educating the illiterate was left to the women. Specifically to the Commission of Public Safety — Women’s Auxiliary Committee. Teachers were organized and instructed to focus extensively on ensuring boys under the age of sixteen were kept in school, as “children who leave school early to enter employment are as assuredly maimed for all time as the men who return wounded from the trenches.”5Ibid. The goal of the MCPS-WAC was not to bar new laborers in the workforce, but to ensure the production of good soldiers and moreover, good citizens. 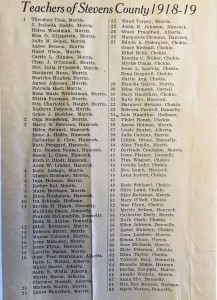 On September 24, 1917 the Woman’s Auxiliary of the Public Safety Commission enrolled as a Section in the National Child Labor Committee so as to promote “the conservation of America’s future brains and strength…and to help protect children in less advanced communities.”6Eschenbrenner, Josephine. Josephine Eschenbrenner, Membership Secretary to Ida Hancock, Madam Chairman, Morris, MN, September 20, 1917, Stevens County Historical Society. In doing so, they subscribed to The Child Labor Bulletin. The outlined mantra of The Child Labor Bulletin was swiftly followed throughout Stevens County by the public school teachers. Teachers were expected to intervene should a family fail to adhere to the Minnesota Labor Laws relating to Women and Children. These laws outlined the maximum hours per day and per week children under 14 and 16 could work, as well as the types of labor both ages were restricted from participating in. 7Vocational Information Service, “Woman’s Occupational Bureau, Minnesota Labor Laws, Minneapolis, MN, August 30, 1918. Unfortunately no list exists for teachers from 1917-1918, but a list does from 1918-1919—shown on the right.

The Great War had a tremendous impact on the teachers and students of Stevens County. Despite the fact that the public school system today remains quite small, the essentiality of promoting nationalism and literacy no doubt left a profound impact on the region.

IT IS FOOD THAT WILL WIN THE WAR–WOMEN IN INDUSTRY