We have splendid dormitories in which the students live, a new dining hall whose beauty cannot be excelled, a gymnasium whose floor space is 2728 feet, and other buildings containing classrooms and laboratories…

Because the 1910’s was a decade of growth for the West Central School of Agriculture, many of the now-current and prominent buildings on the University of Minnesota, Morris campus were built during this time. Five buildings stood on the campus in 1909 at the closure of the Federal Indian Boarding School–a building known as The School House, which was a multipurpose building used for the Indian Boarding School; a Boys Dormitory and a Girls Dormitory; the hospital; and the laundry.2Steven Granger, “Historic Buildings of the West Central School of Agriculture Converted to Use by the University of Minnesota, Morris in 1960,” University of Minnesota, Morris, Plant Services (1998), 3, http://2010.morris.umn.edu/docs/Hist_Bldgs_of_WCSA.pdf (accessed March 19, 2015). The West Central School of Agriculture inherited these buildings to make up the newly created academic institution on its grounds. 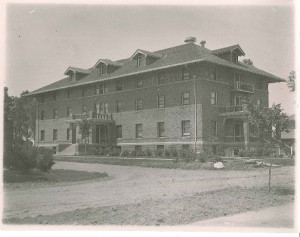 Girls Dormitory from the east

With only five main buildings, the West Central School of Agriculture was in dire need of new facilities. Once a substantial amount of money was appropriated by the State of Minnesota, the new Girls Dormitory was completed in 1912 and the new Boys Dormitory was completed in 1913, both at the cost of $50,000.3Ibid., 10, 12. The newly constructed boys dormitory was also known as Spooner Hall; it was named for local legislature Lewis C. Spooner, who was heavily involved in lobbying to convert the abandoned Indian School into the West Central School.4Ibid., 12. The two new dormitories were just the beginning of a building boom that helped to transform the West Central School of Agriculture into a respectable educational institution. Between 1912 and 1930, ten buildings went up on the campus, redefining the entire layout and design of the campus.5Ibid., 5. All were designed by Architect Clarence Johnson, who intentionally designed all the buildings in a modest style, inspired by Twentieth Century Craftsmen and Prairie-School designs. 6Ibid., 6-7.

The Boys and Girls dormitories from the Indian Boarding School continued to be used as living spaces until The new Girls and Boys Dormitories were built in 1912 and 1913, respectively.  At this point, both the old Boys and Girls Dormitories were converted into academic buildings–agronomy was housed in the old boys dormitory and Home Economics was housed in the old girls dormitory. The School House was converted into an administration building–and was also used as a dormitory for a time. The hospital and laundry buildings stayed as they were for the time being.7Ibid., 4.

The expansion of the campus through architecture during this time period serves as a further reminder that, while the WCSA was experiencing the Great War in its own unique way, it was also growing and changing extensively as an educational institution. This was a period of growth for the WCSA; as the buildings went up, the campus continued to make strides of growth in the first few years of its existence. The War in Europe did not stop the West Central School of Agriculture from expanding; in fact, the war probably assisted in its expansion–as a push for agricultural education was increased in its wake.