WCSA and the War

There has never been a time when the world has needed food as much as it does today, and the farmer is the only man from whom this may be obtained.”

In July of 1914, war was declared in Europe…but the idea of war itself couldn’t have felt farther away from students and staff at the West Central School of Agriculture. The WCSA was flourishing; the two newly constructed dormitories facing each other on opposite sides of the campus mall were far from all the WCSA had to be proud of. Agriculture was thriving in the area, and students from all over western Minnesota were coming to the West Central School of Agriculture in order to gain an appropriate education and take full advantage of those abounding agricultural opportunities. The student population was slowly growing; by the 1918 winter term, school administration began to worry about a need for overflow housing, as registered students were exceeding the number of spaces available in the dormitories on campus.2Morris Tribune (Morris, MN), January 10, 1918.

With the onset of the war, the push for agriculture became even greater. Even before the U.S. entered the war in 1917, they were playing an active role in the war effort by supplying food to Europe. Food shortages became common in Europe during the war years and the allied forces turned to the United States, with its abounding agricultural landscapes, to provide assistance. Agricultural food production in Stevens County became exceptionally important, as it utilized its rich agricultural lands to assist in the U.S.’s effort to send food over to Europe.3 Ibid. 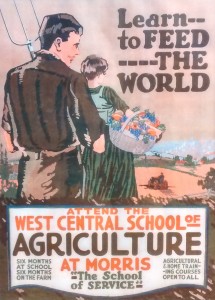 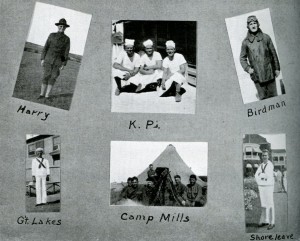 During the War itself, the WCSA was involved in the war efforts in many different ways. In August of 1917, the campus hosted a large patriotic gathering that attracted visitors from throughout the county.8From Peace and Prosperity to War and Nationalism. Faculty meeting minutes from 1918 encourage faculty members to be enthusiastic about war efforts and to actively show patriotism on campus.9F. A. Stever, Faculty Chairman to Superintendent P.E. Miller, October 11, 1918, University Archives, Rodney A. Briggs Library, University of Minnesota, Morris, Morris, Minnesota. Groups of students and faculty members were created to help with Red Cross efforts.10Ibid; F.A. Stever, Committee Appointments, Faculty Meeting, October 23, 1918, University Archives, Rodney A. Briggs Library, University of Minnesota-Morris, Morris, Minnesota. The campus nurse, Florence Hulett, a graduate of the University of Minnesota School of Nursing, enlisted shortly after the war and worked in a hospital in France. Hulett was not the only faculty member to serve in the war, though she was the only woman; faculty turnover was not uncommon with enlistments. A number of students–alumni and current–served as well. The 1919 Moccassin, the WCSA student yearbook, provides an honor roll of a list of faculty, students, and alumni who served in the war in some way–though the yearbook staff does admit that they weren’t able to compile a complete list. Six WCSA boys died while in service to their country.11 “War Activities,” Moccasin 1919 Yearbook.

In the fall of 1919, the school erected a flagstaff memorial for the WCSA students who served in the war. The memorial, which was funded through subscriptions from current students and alumni, was located on the campus mall. While this flagstaff no longer stands, there is a plaque dedicated to the WCSA boys who fought in the Great War in the WCSA War Memorial Garden just outside the present-day Education Building (the WCSA Infirmary) on the University of Minnesota, Morris campus.

The Selection of the flagstaff and dedication tablet is a most appropriate one for our War Service Memorial and every student may feel proud of this tribute to the boys who answered their country’s call. It will throughout the years to come, ever support our Country’s flag and remind us of the support our boys gave to their country during the years of national peril. 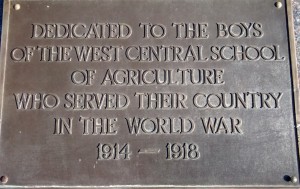